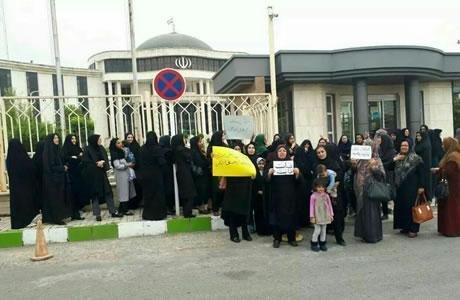 Women teachers have added to their protests in Iran in recent days, against their undecided job conditions and the violation of their rights.

A group of preschool teachers gathered on October 11 and 12, 2017 outside the Governor’s Office of Golestan Province in northern Iran.

The gathering started at 3 p.m. on October 11, the same day that a new governor was introduced. They staged a protest over their undecided job conditions and continued to the next day.

The number of protesting teachers was around 100. They said, bill on their employment had been adopted by the government and the parliament but had not been implemented. (The state-run T-news news agency – October 11, 2017)

A similar protest had been staged a month ago on September 4, but the officials have done nothing yet. (The state-run ILNA news agency – September 4, 2017)

In another development, a group of contract teachers gathered in front of the Department of Education in Gilan Province on October 12, 2017, to protest against the insulting manner of Hajati, the department’s director.

“While the Education Minister has issued a license for the employment of some 600 contract preschool teachers for 25m000 hours of work, he insulted the teachers’ representative and said, ‘It’s impossible to recruit you, get out of my room,’” one of the teachers said.

A third gathering took place in Tehran’s 18th district on October 11, 2017, in protest to cancellation of their transportation service.

The service had been transferring teachers teaching in this district from remote areas and other cities such as Karaj, Shahriar, Shahr-e Qods and other neighboring areas but it had been arbitrarily cancelled.

Toddler girl forced to see her mother under torture