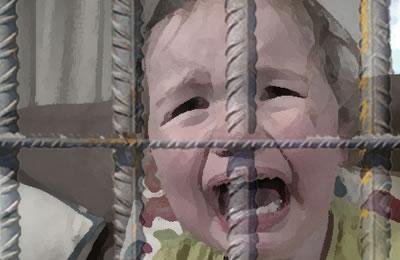 Toddler girl forced to see her mother under torture

Once in 1985, when I was under interrogation in Evin Prison, I was sitting blindfolded across from the room where the Ministry of Intelligence agents tortured the prisoners.[1]

The door was opened and closed several times. I could hear a woman screaming. Obviously, she had been tied to a bed and was being tortured.

At the same time, a three-year-old girl was playing at the end of the corridor, as if she did not hear anything and was busy playing on her own. Suddenly, one of the interrogators came out of the room and walked towards the little girl. He took her hand and angrily dragged her towards the torture room.

I guessed that she must be the daughter of the woman who was under torture. But what was this man going to do to her?

As soon as the girl saw her mother, she started screaming. The door was closed and the tape recorder was turned on, loudly playing mourning songs which did not let us hear the other sounds. The incident so distressed me that I wanted to die.

Later that night, I could hear that woman speaking to the prisoner next door. They were talking through a window. She was telling her, “When they brought Nasrin into the room, she was terrified when she saw me and started screaming. The interrogator lifted Nasrin by her hair and told her, ‘Tell your mother to talk!’ My hands and feet were tied. From under the blindfold I could see my daughter who was hanging in the air and I wanted to die. I couldn’t do anything. I just cried out and sought help from (Shiite leading saints) Fatemeh and Imam Hussein! The interrogator told me, ‘May Fatemeh Zahra damn you. Start talking instead!’ ”

Having seen that scene and after hearing that story, I couldn’t stop my tears that night in Evin.

[1] A short passage from “A Galaxy of Stars”, written by Hossein Farsi, former political prisoner of the 1980s.

Iran: A Kurdish woman set herself on fire in Saqqez