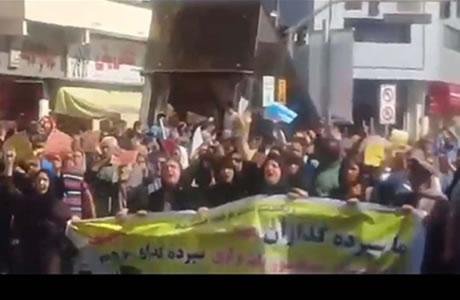 People whose properties have been looted by Iranian state-backed institutes staged a rally in Tehran at 10 a.m. October 15, 2017. A large number of women bravely participated in this extensive protest, some with their children, and played an active role.

The demonstrators gathered in central Tehran’s Keshavarz Blvd. to march to the office of the mullahs’ president and demand their plundered money.

The call for this rally had been issued on the internet. In addition to the depositors in Tehran, large groups of people had joined from other cities including Mashhad, Ardabil, Ahwaz, Kerman, and Rasht.

The protesters addressed Rouhani and chanted among others, “Rouhani you have devoured people’s money”, “state-backed embezzlement is utmost treachery.”

At the same time, depositors looted by Arman-e Alborz Institute started another demonstration in Valiasr Street and later joined the other groups.

The demonstrators chanted, “The people are awake and loathe thieves”, “Abolfazl-e Alamdar (brother of the 3rd Shiite Imam Hussein), remove the mullahs’ regime”, “you abused Islam as a stepping stone to devastate the people”, “the reason for people’s poverty is this irresponsible government.”

As the demonstration reached a climax, the State Security Force (SSF) intervened and tried to disperse the crowd by surrounding and threatening them. However, the demonstrators refused to scatter and moved on to gather in front of the parliament. They intended to march on towards the residence of the mullahs’ supreme leader, Ali Khamenei, but were prevented by the police.

Caspian, Padideh Shandiz, Alborz Iranian (Arman), Pardisban and other institutes have been established in recent years by the Revolutionary Guard Corps (IRGC), the Judiciary and the State Security Force (SSF) in cities across the country under the pretext of chain cooperative enterprises and banks. They collected deposits from all walks of people and plundered them.

Hatami Yazdi, a financial expert, had previously told the state-run television, “Those who launched these institutes enjoyed political clout and a special backing to circumvent the law and do not implement it… All these institutes have been established with improper political support, and continue to survive with the same backing.” (The state-run TV News Network – June 20, 2017).