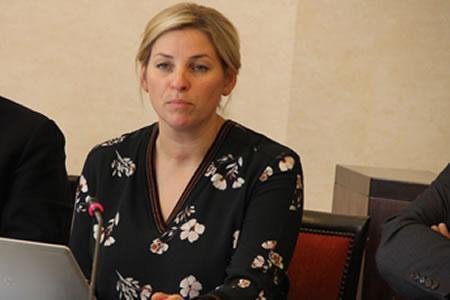 Following is the text of the speech by Hon. Nele Lijnen, member of the Parliament of Belgium, to a conference at the parliament on Human Rights in Iran.

I would like to focus on the situation of women in Iran. During the first 4 years of the presidency of Rouhani, at least 81 women were hanged. No other regime in the world has executed so many women.

I should point out that Iranian women have fought for their rights for many years and are in a different class than some of their neighbors.

Iranian Constitution defines the duty of a woman as to “give birth to children and raise them”.

This Constitution puts women at the disposal of men practically as a captive or a sexual slave. Girls can be deprived of education at the age of 13 and even younger, as her father is permitted to wed her to a much older man. Under President Rouhani, a new law was passed that even allows a man to marry an adopted step-daughter from the age 9.

Women are banned from studying in more than 77 college fields. Employers have set conditions on the marital status of women they employ and make them sign papers and agree to be fired if they get pregnant.

The Iranian regime’s laws deprive women from artistic activities as a source of income. Women are not allowed to sing in public nor are they allowed to play in orchestras and perform in concerts. They are not allowed into sports stadiums where men are playing.

The unemployment rate for young women under 30 years of age is 85.9 per cent.

Many women get university degrees and most of them cannot find jobs and become unemployed.

Prostitution has increased in Iran. Some women have to sell their body to provide for only one meal. According to some government sources, between 5000 and 15000 women in capital Tehran sleep in cardboard boxes on the streets.

Iran ranks first in the Middle East and third in the world in women’s suicide. That is because women are under constant pressure for the way they dress or cover their hair; they are subjected to inequality and discriminated against; they are humiliated in various forms and they are deprived of job opportunities.

The women also have no real influence in politics, despite the fact that more than half of the country’s university graduates are women.  There is no female minister in the cabinet of Rouhani. He appointed only three women to non-minister posts to act as his own deputies and advisors. In the current Iranian parliament, there are only 17 women in a 290-seat parliament which make women’s participation 5.8 percent.

In these circumstances, I am delighted that the Iranian opposition is led by a competent woman, Maryam Rajavi, whom I have met several times. I share her vision for a future democratic Iran and I have been supporting her movement for many years. So I am quite optimistic. But we have to support the Iranian opposition to be able to achieve a regime change in Iran and I encourage my colleagues to join us in this campaign.