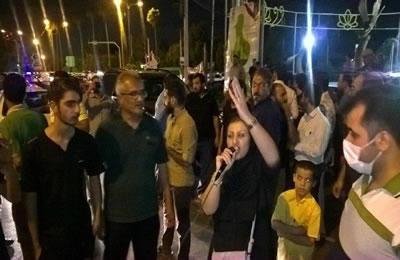 This month has been studded by protests to the state-backed companies in Iran which have looted people’s properties and deposits with women playing an active part in them.

In Tehran, people whose deposits have been plundered by Padideh and Caspian institutes rallied at 7 pm, October 19, 2017, in Keshavarz Blvd. and chanted, “Citizens’ rights are gone, people are oppressed”, “Shame, shame, on the Judiciary.”

In Ahwaz, capital of the oil-rich province of Khuzistan in southwest Iran, people protested against the government-backed Arman institute, by gathering at 5 pm in front of the governor’s office upon a previous call.

The protesters got furious when they faced closed doors of the governor’s office and attempted to break them open, which forced the guards to open the doors.

The State Security Force attacked the protesters by batons, taking away or breaking their cellphones to prevent them from filming the scenes. However, people did not care and continued protesting and shooting films. Eyewitnesses said a large number of guards had surrounded the protesters who chanted, “Death to the irresponsible government”, “We are fighters, fight and we will fight back.”

One of the women participating in the protest, furiously cried out, “Iran is the only country whose wealth goes everywhere except to her own people.”