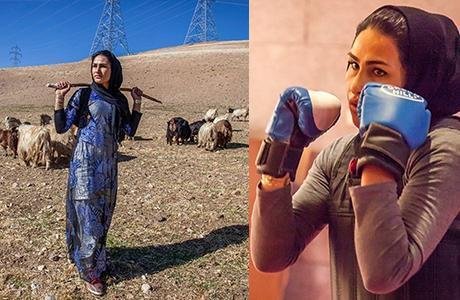 Iran: A glance on women’s sports

The Iranian regime does not support women athletes and by doing so attempts to marginalize them as it has done so in politics and economics.

Atousa Abbasi, a bronze medal winner in the Asian Bicycling Race and a record holder in women’s speed cycling in Iran, is now peddling in the streets due to financial problems. She has been deprived of participating in cycling tournaments due to breaches made by her husband who is a cycling coach. (The state-run Mashreq website – October 18, 2017)

At the same time, Sousan Rashidi, who has been the champion of women’s kick boxing for eleven terms, is now training under difficult conditions for foreign tournaments. She is a nomad girl living in Kermanshah (western Iran). (The state-run Fararu website – October 18, 2017)

Due to poverty and the special conditions of her family, she has to work in the village since early in the morning, including baking bread, taking the sheep for grazing, bringing log wood, etc. She does not even have her own birth certificate and uses her deceased sister’s birth certificate.

“I became a champion for nine terms, but I did not receive any prize for these wins,” she added. (The state-run ISNA news agency – December 26, 2016)