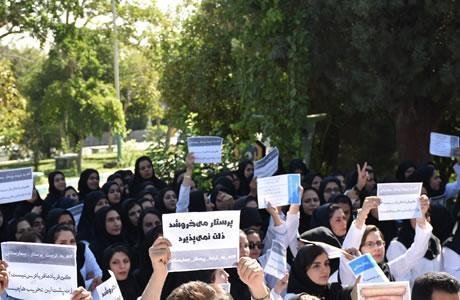 The personnel of Khomeini Hospital of Falavarjan, in Isfahan Province in central Iran, staged a gathering on Sunday, October 21, 2017, to protest non-payment of their salaries and rewards for one year as well as the inappropriate management of the hospital.

Some 200 doctors, nurses, and other hospital employees went on strike and demanded their salaries to be paid. (The state-run Fars news agency – October 21, 2016)

It has been more than two years that Iranian nurses are protesting in different cities against violations of their rights.