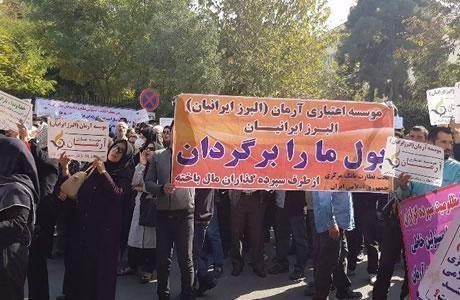 A large number of Iranians whose deposits have been plundered by state-backed credit institutions such as Caspian, Alborz-e Iranian (Arman) and Padideh gathered in front of the mullahs’ Parliament in Tehran (Majlis) to demand their stolen money. The call for this rally had been issued on the internet in advance.

Almost 2000 women and men took part in the rally and chanted among others, “fraud has been institutionalized, hearts are filled with spite”, “I will not give up until I achieve my rights”, “Enough of injustice.”

A woman cried out, “The government plunders everybody under the name of God and the Prophet. They speak of killings and trampled rights elsewhere but are killing us at the same time.”

As the protest climaxed, the State Security forces intervened and started beating with batons the protesters who reacted by chanting, “Death to the dictator.” A number of protesting women and men brutally attacked by police were rescued when other protesters resisted. Hurtling rocks, wood and other objects at the police. They swelling crowd also chanted, “Death to Daesh” as agents attempted to beat up and arrest the demonstrators. Intelligence and plain-clothes agents shot films and took pictures.

The police surrounded the protesters so that they could not leave the area, but the protesters broke through the barriers and started marching towards Baharestan Square. The repressive forces tried to control the demonstrators by deploying a motorized unit, but the people pelted them with rocks while continuing their rally. A large number of bystanders joined the protesters.