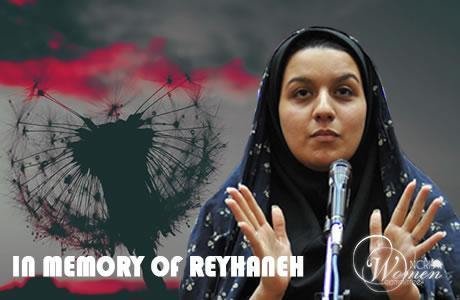 Reyhaneh Jabbari walked the gallows at dawn on Saturday, October 25, 2014, after seven years of incarceration.

Since then, Reyhaneh stands as the symbol of Iran’s defenseless women who are handed the death penalty without deserving it. At the same time, she has become an icon for brave women who do not succumb to the Iranian regime and its demands.

Reyhaneh was viciously tortured to make false “confessions” which would whitewash the methods and image of the Ministry of Intelligence but she did not give in. Instead, she wrote about the incident and about many women in the clerical regime’s jails whose only crime was being poor.

She cried for and wrote about the victims of the clerical regime’s misogynous laws and for the young women who did not have any support in society and were victims of oppression and violence.

Let us remember on this day, this young courageous woman, Reyhaneh Jabbari, who resisted for seven years at the cost of her life to uphold her dignity and humanitarian values.

She remains an idol for young Iranian women and men who oppose the regime’s injustices and yearn freedom. In her name, and in the name of all the innocent victims of the clerical regime, the people of Iran call for justice.