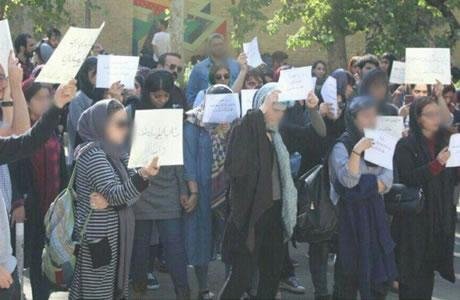 Iranian students staged a number of gatherings at Tehran’s Amir Kabir and Allameh Tabatabaii universities and the University of Qazvin on Monday, October 23, 2017, to protest the new nominee for the Minister of Sciences and Higher Education. Girl students actively participated in these gatherings. (The state-run Alef website – October 23, 2017)

Amir Kabir (a.k.a. Poly Technique) students held placards which read, “University is not a military garrison” and “No to incompetent minister.”

Similar gatherings took place on October 24, 2017, at the University of Sciences & Industries, and the School of Art in Tehran as well as at the Fedowsi University of Mashhad.

Rouhani’s nominee, Mansour Gholami –who was proposed to the mullahs’ parliament on Sunday, October 22– currently presides over the Bou Ali Sina University of Hamedan. He held the same post under Mohammad Khatami (1997-2005) where students were dealt with by intelligence agents. He also opened the dormitories for entry of plain-clothes agents and endorsed the purchase of electric batons for the university’s disciplinary forces to facilitate their crackdown on students.