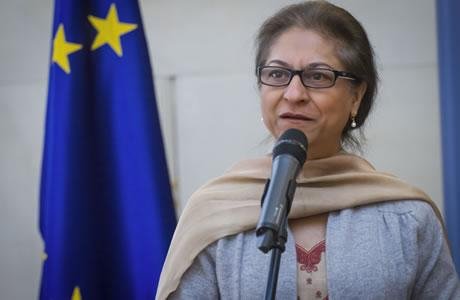 “The current human rights situation in Iran… is deeply concerning in many respects” is how the Special Rapporteur on the situation of human rights in Iran, Ms. Asma Jahangir, described her assessment in the first six months of 2017. She said “much remains to be done to realize” women’s rights as outlined in the 5th Sustainable Development Goal.

Ms. Jahangir addressed the Third Committee of the UN General Assembly on October 25, 2017 before submitting her report. In her brief, moving statement, she depicted “the blanket of fear and intimidation” directed towards “those who continue to speak out and provide information to my mandate” and paid tribute to them.

Among a long list of issues of concern, Ms. Jahangir touched on the situation of women in Iran and said, “I am also deeply concerned by the reports of attacks on women human rights defenders in the form of judicial harassment, detention, and smear campaigns,” and added that “the vehement reaction to the social media campaigns protesting against mandatory dress codes; the arrest of individuals for allegedly reading and spreading feminist literature; the ongoing ban prohibiting women from watching sporting events in stadiums in contravention to the Charter; and exclusion of women from certain occupations and positions suggest much remains to be done to realize” the commitments made by the Iranian regime to the Sustainable Development Goals, including Goal 5 on achieving gender equality and empowerment.

She called on the Iranian regime to address these concerns in practice, and in legislation through ratifying the Convention on the Elimination of All Forms of Discrimination against Women and to repeal all laws and policies that discriminate against women and girls.

The UN Special Rapporteur on the situation of human rights in Iran also addressed the massacre of 30,000 political prisoners in Iran in 1988. She spoke of having received “significant number of petitions, communications, and documentation related to the reported execution of thousands of political prisoners, men, women, and teenagers” which “speaks of a deep and unremitting pain that must be surely addressed.”

Ms. Jahangir reiterated, “The killings themselves have been acknowledged by some at the highest levels of the State.”

“Almost on a daily basis, I receive heartfelt letters from the relatives of those killed calling for answers. The families of the victims have a right to remedy, reparation, and the right to know about the truth of these events and the fate of the victims without risking reprisal,” the Special Rapporteur pointed out.

In the few minutes of her speech, Ms. Jahangir outlined a long list of concerns over the human rights situation in Iran, which are true for both women and men. A quick glance over excerpts of these concerns gives a chilling picture of life under “the blanket of fear and intimidation” in Iran:

I am concerned by the rate of executions in Iran.

I take the opportunity to reiterate my request for a list of all juvenile offenders on death row and reiterate my appeal to the Iranian authorities to urgently abolish the sentencing of children to death.

There are numerous reports of the use of physical and mental torture, including to coerce confessions. I regretfully note that amputation, blinding, flogging, and the continued use of prolonged solitary confinement continue to be regularly practiced.

I am also deeply concerned by consistent reports of the denial of access to proper and necessary medical treatment of detainees, including the deprival of medical care as a form of punishment.

I call for the immediate withdrawal… of charges against all individuals held for peaceful exercise of freedom of expression, religion, or belief.

I have received reports of actions taken, mainly by the judiciary, against the family and lawyers of activists in order to exert pressure upon them.

In my report I also highlight the situation of trade unionists held in prison for peaceful activism, as well as the urgent and critical health situation of prisoners of conscience on, or having undergone, life-threatening hunger strikes to contest the legality of their detention.

Equally disturbing and no less chilling are the reports that I receive of violations against the rights to freedom of expression, opinion, information and the press. As of June 2017, at least 12 journalists, as well as 14 bloggers and social media activists were either in detention or had been sentenced for their peaceful activities. Other media workers report being subjected to interrogation, surveillance, and other forms of harassment and intimidation.

I received written submissions from many of the journalists that I interviewed which detailed the intimidation that they had been subjected to. They all sought private meetings for fear of the consequence of being identified as having provided information to my mandate.

In my report, I noted that the Working Group on Arbitrary Detention had identified an emerging pattern concerning the arbitrary deprivation of liberty of dual nationals, which has continued this year.

I was able to receive further detailed information related to violations of due process and the right to fair trial.

I am deeply concerned at the numerous and consistent reports indicating a lack of independence of the judiciary, as well as the restrictions imposed upon the bar associations which limit their ability to operate independently.

There are also a significant number of reports of lawyers being intimidated, harassed, and arrested whilst performing their professional duties.