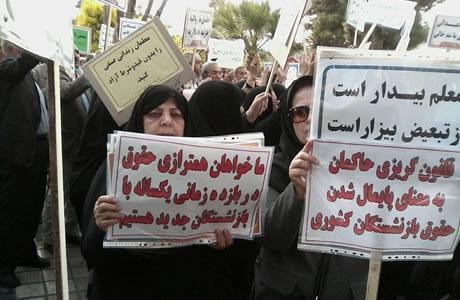 Women have actively participated and played leading roles in numerous protests and anti-government gatherings across Iran on October 29 and 30, 2017, against state-backed institutes that have plundered people’s savings and deposits.

People plundered by Alborz-e Iranian (Arman) and Padideh institutes gathered on October 30, 2017, in front of the United Nations Office in Tehran. They denounced the government’s treachery, lies and oppression in their chants.

Plundered clients of Arman-e Vahdat institute also held a gathering in front of the Governor’s Office of Khuzistan Province in Ahwaz, southwestern Iran, and demanded their deposits. The protesters pounded on drums and vowed to continue these protests until they receive their money.

On the same day, a group of retired government employees gathered in front of the Planning and Budget Organization in Tehran upon a previous call issued on the internet which mentioned that the protest gathering starts on October 30 and will continue to November 2, 2017.

In their chants, the retirees lamented about the high cost of life and the absence of justice in the country. They also reiterated their solidarity in the face of hollow promises given to them for years.

Another protest gathering was also staged in the northern Iranian city of Langroud on October 29, 2017, where nurses and staff of Amini Hospital demanded their unpaid fees for one year. Gilan’s nurses have not received their fees for one year.