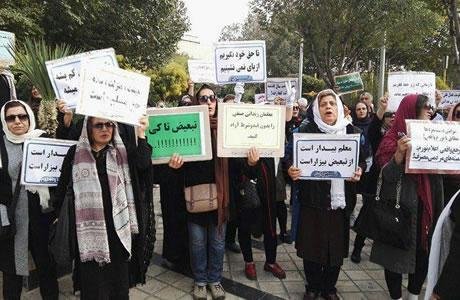 With protesters joining from other Iranian provinces, the retired government employees continued their protest for a fifth day on November 4, 2017, in front of the Budget and Planning Organization in Tehran. They had initially announced that their protest was set for four days.

Retirees converged in Tehran from Kermanshah, Yazd, Alborz, and several other provinces to protest against their poverty and abysmal living conditions.

They held placards reading, “We will not give in until our demands are met”, “38 years have passed, where is justice” and “teachers are awake and hate discrimination.”

The protesters also demanded the release of teachers detained in prison.