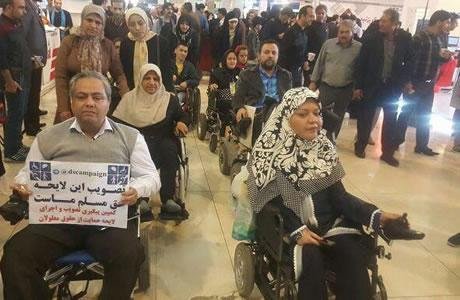 People plundered by Alborz-e Iranian (Arman) institute held their protest at 10 a.m. on November 3, 2017, at the Iranian Press Exhibition in Tehran. People who have suffered financial losses, chanted slogans against the mullahs’ Supreme Leader: “Khamenei, shame on you, step down from your throne!” They also called for the ouster of Saif, head of Iran’s Central Bank.

The protesters took their protest to the Press Exhibition after an Iranian MP revealed that the Supreme Council for National Security had passed a bill prohibiting the media from broadcasting the voice of people who have lost their deposits! (The state-run Dolat-e Bahar website – November 2, 2017)

On the same day, a group of people shouted and yelled at Massoumeh Ebtakar, Rouhani’s deputy for women and family affairs and the former head of the Environmental Protection Organization. They called her and her husband “thieves”, and said, “You ruined the environment, death to you; you are a criminal; come up close and answer us.”