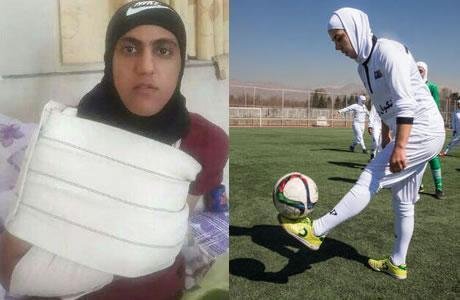 Zeinab Karimi, footballer of the Kheibar women’s team of Khorramabad (capital of Lorestan Province in western Iran), experienced an inhuman treatment after being injured in the field.

In an interview about her injury during the third week of women’s Football League she said, “I was injured in the 20th minute of the game. I remained suffering from pain beside the field until the end of the first half of the game. The supervisor did not even turn an eye on me. The ambulance driver came to me, but when I asked him to quickly take me to the hospital, he answered that ‘the supervisor does not allow this. Since you are not bleeding, we do not have permission to transfer you to hospital.”

After a while, I was taken to hospital by someone’s car.

As for the reaction of the manager of the Khuzistan Club who said, “there was not any serious problems,” she posed a question, “Is a dislocated shoulder not important?”

“I waited for four hours in the hospital before being attended to because I had not been transferred by an ambulance. They did not even give me a chair to sit,” she lamented. (The state-run ISNA news agency – November 5, 2017)