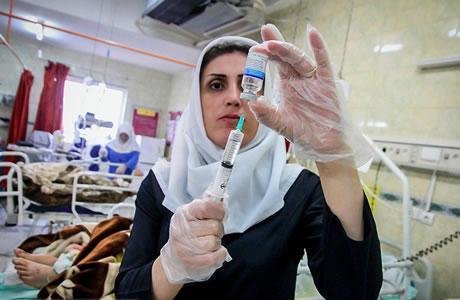 Iranian nurses consisting of a high number of women work under unbearable conditions which have led to the deaths of a number of them. However, Iran’s clerical regime has so far not attended to this problem to find a genuine solution.

Alireza Azarpanah, Head of the Nursing System in the city of Doroud, in western Lorestan Province, said, “Job-related stress rapidly frazzles nurses. The fatigue caused by compulsory overtime work, complex shifts as well as having to do things unrelated to their profession, bring about psychological and physical harms for them.”

He suggested the implementation of the Law on Harmful Jobs as a solution which would reduce the pressure on nurses by offering them early retirement. (The state-run House of Nurses website – November 6, 2017)

The clerical regime’s Supreme Administrative Court announced on November 7, 2017, that the Law on Early Retirement after 20 years of work in harmful jobs is applicable to nurses.

However, in light of the shortage of 100,000 nurses and the simultaneous lingering of 11,000 unemployed educated nurses in the country, the implementation of this law seems to be adding pressure on nurses rather than reducing it. (The official IRNA news agency – November 7, 2017)