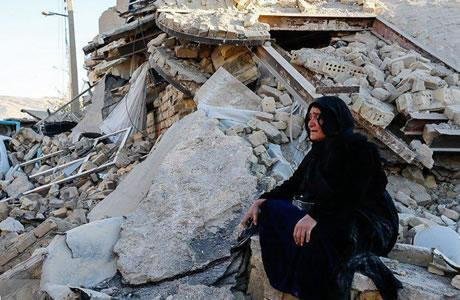 The 7.3-magnitude earthquake that shook western Iran late Sunday night, November 12, 2017, has left at least 450 people dead, 7100 injured and over 70,000 people homeless in Kermanshah Province including in Qasr-e Shirin, Islamabad, Sarpol-e Zahab, Salas Babajani and Kerend. More than 500 villages have suffered damages in the earthquake which has been described as the world’s deadliest so far this year.

Water and power are out and hospitals do not have enough resources and facilities.

Some 240 of the dead are from Sarpol-e Zahab. The town has only one hospital which has been demolished with all patients and hospital staff buried under the rubble.

Eyewitnesses have described the situation as “disorganized.” There is not enough food, nor fuel and electricity is cut off. Many families have not been sheltered and there is fear that freezing cold could take more lives.

In fear of public fury and outrage, the clerical regime has been trying to conceal the true dimensions of damages and casualties.

The commander of the Revolutionary Guard Corps (IRGC), Mohammad Ali Jafari, told the state TV on Monday afternoon that only a few people were left under the rubble and the necessary aid has already reached or will reach the stricken areas by sunset.

At 11 p.m., Monday night, the people of Sarpol-e Zahab staged a protest against incompetency of the authorities and the Interior Ministry who have not yet sent any aid to this area which has been hit the hardest.

There are survivors under the rubble, but people do not have even a single loader or mechanical shovel to remove the heavy debris and bring out the survivors.

Earthquake has reportedly razed Salas Babajani village to the ground.

Mrs. Maryam Rajavi, President-elect of the National Council of Resistance of Iran, expressed her condolences to the families who have lost their loved ones in the earthquake. In light of the regime’s past record of neglect and failure to send immediate aid to the affected areas, she called on the residents of western parts of Iran to personally rush to the aid of victims and injured, and rescue the survivors.

She pointed out that just as opposed to the clerical regime, now is the time to show solidarity. She described assistance and aiding the victims as a sacred national duty.

The number of victims of natural disasters in Iran are usually higher than the world’s average because the ruling regime pockets the country’s wealth or spends it on fomenting war in the region. The regime further gives priority is to domestic repression and preventing protests by people in the affected areas, as was the case in Sarpol-e Zahab on Monday night, where it dispatched anti-riot troops.