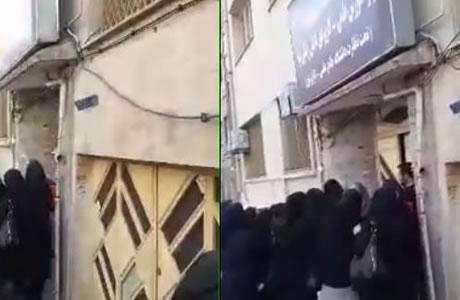 Iran: Protest of girl students to extortion by school officials

A group of girl students of the now-dissolved Tiba Applied Sciences University staged a protest gathering outside the school’s building in Tehran on Sunday, November 12, 2017. They had objection to the extortion of their tuition fees, saying their money had been deposited in the personal accounts of school authorities.

The students started their protest on October 31, 2017, because their courses began with one-month delay, with limited units and low quality, and were subsequently called off without prior notice.

The regime’s officials had founded this university under the pretext of promoting skills of economic sector’s employees. However, they plundered the students’ tuitions and did not pay them back after the school was shut down, just like the IRGC-backed credit institutes.