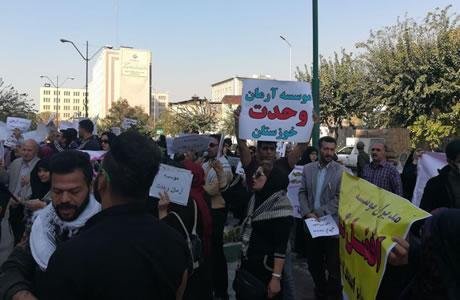 Iran: Protest of plundered women and men outside the Parliament swells

The protest by women and men plundered by Arman-e Vahdat credit institute continued outside the Parliament in Tehran for the second consecutive day on Wednesday, November 15, 2107, as more protesters cheated by Afzal-e Tous and Alborz-e Iranian financial institutes also joined them.

Plundered people, including many who had come from other provinces, demanded the regime’s officials to account for their stolen money.

People plundered by the Arman Institute of Ahwaz, addressed their city’s deputy in the parliament, calling him a “traitor.”