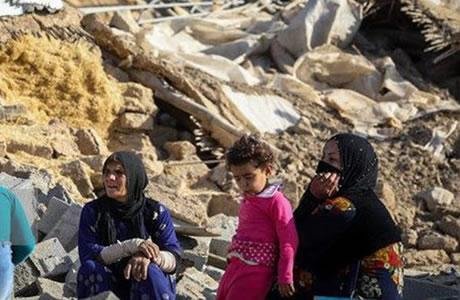 A week past the massive earthquake in western Iran, survivors in most affected areas have no water, electricity or even tents.

Survivors say thousands have died in the earthquake. Women and children live on the streets in the cold, without any shelter. At least three children have been reported killed due to the freezing cold.

Local officials say some 30 per cent of the livestock have been killed in the earthquake. No action has been taken to remove the corpses of animals and the garbage. Many sewage structures have been damaged and there is a threat of dangerous diseases spreading.

Video clips show harrowing scenes of the areas affected by the quake.

A young man screams: “They take away and sell the aid packages. If there was a rule of law, these people should have been executed. My wife and infant child are shivering in the cold in the street.”

Another man cries out, “My wife and child died in the quake. The TV says 300 people died, but the number of dead is more than 3000.”

A victim laments, “All of our belongings are under the debris. Now, they demand an ID and the national card to give us some aid. How am I going to find my documents from under the rubbles?”

Another man complains, “None of the officials came to ask how we are doing. I have lost two of my children. It’s been four days but my wife and children have no tents.”

An MP told the mullahs’ parliament, “More than 1,000 people have died… People are hungry.”

The state-run daily Entekhab wrote, “Relief aid is entering the cities hit by the earthquake but it is unclear what happens to it.”

Meanwhile, security forces prevent people from taking aid to the hardest hit Sarpol-e Zahab and its surrounding villages. According to reports from the area, they stopped the trucks and vehicles carrying aid, unloaded the tents and blankets, saying they need to be distributed by the Red Crescent.