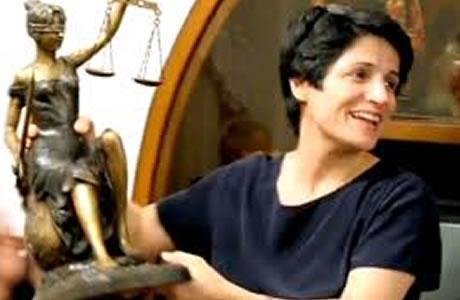 Former political prisoner, Nasrin Sotoudeh, Iranian lawyer and human rights activist, has been once again summoned to the Prosecutor’s Office based in Evin Prison.

In remarks made to the media on Monday, November 20, 2017, Ms. Sotoudeh said, “Since the Revolutionary courts and prosecutor’s offices are not independent and do not attend to political crimes according to the law, I would refuse to refer to the Prosecutor’s Office.”

The summons indicated a five-day time limit for Ms. Sotoudeh to report in but did not indicate what her charges were. The agents who delivered the summons insisted to have the day on which Ms. Sotoudeh would report to the Prosecutor’s Office, which she refused to specify.

Nasrin Sotoudeh was arrested in September 2010 and initially sentenced to 11 years in jail. She was deprived of practicing law and of leaving the country for 20 years. The Appeals Court subsequently commuted her sentence to six years in jail and 10 years for being deprived of lawyering. In September 2014, she was released from jail after serving two-thirds of her sentence. In November 2014, she went on a sit-in protest outside the League of Justice Ministry Lawyers, to demand revocation of her professional deprivation. Other lawyers joined her and she finally managed to renew her license to practice law.