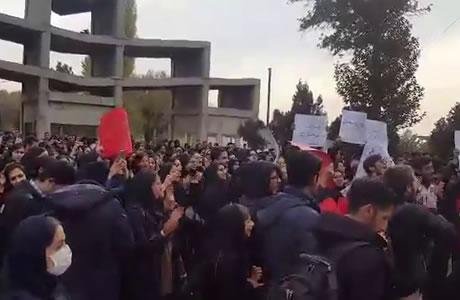 Some 600 students of Tehran’s Kharazmi University, including large numbers of women, staged a protest on November 21, 2017, on the university’s campus in Karaj, demanding officials to deliver on their promise to build a metro station for the campus in Karaj, west of Tehran.

The protest started at 9.30 a.m. in front of the university’s central building with chants denouncing continued theft and embezzlements. The students marched towards the entrance with chants of “unite, unite”, calling on other students to join them.

The Kharazmi University entrusted its lands to the municipality and the Ministry of Roads and Urban Development in return for building a metro station for the university’s campus. None of the two government organs, however, fulfilled their promise. Furthermore, it has been announced that the construction and passage of a metro rail will close the university’s entrance from the expressway and cause further problems for the students’ transportation.

Iran: No reporting on women’s futsal victory in match against Italy