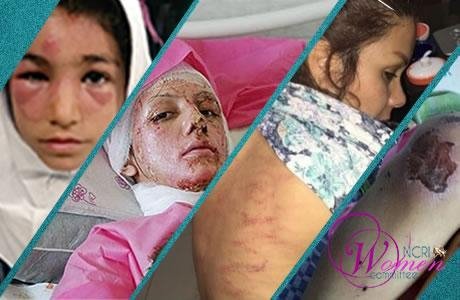 Not only the clerical regime’s Constitution and laws institutionalize violence against women and sanction the cruel punishments of flogging, stoning and blinding, but the regime systematically and formally undertakes violent measures against Iranian women day and night, throughout the country, an ongoing trend which follows an unprecedented brutal crackdown in the 1980s, eliminating thousands of oppositionist women.

Here’s a glance over the regime’s record over the past year:

The Commander of the State Security Force, Hossein Ashtari, announced last year that at least 2,000 women are arrested in Iran every day for not properly covering their hair. These women are brutalized and forced into the SSF cars to be later mistreated and humiliated in detention centers before being compelled to sign papers and pay heavy bails in order to be released. Iranians have been able to capture some of these horrifying scenes and post them on the internet which gives a glimpse of the terror directed against Iranian women round the clock.

The actual numbers are certainly higher as evident from the official calls and troop mobilizations all across the country for the “veil and chastity” campaigns. SSF commanders and governors in provinces across the country issued stern threats, one after the other, to deal with mal-veiled women, particularly those who drop their veils behind the wheels.

The official in charge of “promoting virtue” in the province of Semnan declared that they had reinforced their troops by 2000 female agents to facilitate their crackdown on women. The SSF Commander of the small northern Iranian city of Tonekabon announced that their forces had dealt with 22,000 women over the past year.

While the regime’s Judiciary rejected the adoption of a bill criminalizing violence against women, the regime has criminalized women’s wearing of attires that do not comply with the regime’s standard dress code outside office hours.  The Interior Ministry planned inspections of government and private sector offices and hospitals to monitor women’s proper observance of the veil.

Peddler women are among the most oppressed sectors of society who are constantly attacked and their limited belongings confiscated. Municipality agents attacked a destitute peddler woman in Tehran on September 1, 2017, which led to her suffering a heart stroke, and beat another peddler woman in Ahwaz by electric shockers in December 2016.

The Iranian regime’s Judiciary has handed out at least a dozen flogging sentences for women some of which were carried out. This is in addition to a stoning and a blinding verdict.

At least 81 women have been executed in the 4.5 years of Rouhani’s tenure, 10 in 2017, while numerous others including a mother of six have been sentenced to death.

Dozens of women and female activists have been arrested and interrogated under torture for defending women and children’s rights, celebrating the New Year or the Iraqi Kurdistan’s referendum outcome, demanding justice for the killing of their siblings or asking the whereabouts of their missing loved ones. Female prisoners have been badly beaten up and incarcerated in solitary confinement for objecting lack of basic needs in prison, such as warm water and heating in winter, while others were deprived of receiving their needed medical treatment.

Prison guards have on numerous occasions raided women’s wards to brutalize and terrorize them. An interpreter was sentenced to death and a number of journalists were apprehended for reporting the truth. A civil activist was arrested and beaten up, shackled and hand cuffed in prison and subsequently sent to a mental hospital for further psychological torture.

Mothers of civil rights activists have been beaten up by prison guards. A pregnant woman suffered miscarriage after intelligence agents raided her home in search of her husband. Mahdiss Mirghavami, an engineer, committed suicide when released after two days of detention because she had been sexually assaulted in jail.

Under such misogynous regime which cracks down on women through 26 government ministries and agencies, a male-dominated culture continues to take massive toll on ordinary women. According to the Iranian regime’s official statistics, 66 per cent of Iranian women experience domestic violence in their lifetime. Although the figure is double the world average of one-in-every-three women (or 33%), it must be considered a flagrant underestimation of the situation for Iranian women.

There have been numerous public reports about sexual assault on girl child laborers and mentally disabled women, murder of girls as young as six and seven after rape, suicide of young teenagers after rape, rape of young girls by immediate family members, honor killings for resisting forced marriage, acid attacks across the country, murder of a young woman in the university’s dormitory, brain death of a five-year-old girl caused by vicious beating of her stepfather, as well as the discovery of the charred body of a young teacher in the mountains of Ramhormouz. There was also a report on a woman sentenced to 15 years in jail and 99 lashes who had been drugged and raped.

Obviously, these reports are only the tip of the iceberg of crimes and violence committed against women under this misogynous regime.

According to the regime’s officials, 255 women filed complaints against their husbands’ abuse only in four months in the province of Kohgiluyeh and Boyer Ahmad, in southwestern Iran. The Coroner’s Office in Tehran announced it has an average of 52 referrals per day by women who have been battered and it had registered the names of 12,159 women, victims of violence in only four months from March to July 2017. An official of the National Welfare Organization has registered 11000 women as victims of domestic violence without specifying the span of time. And the Coroner’s Office of Khorassan Razavi Province announced 7000 women had been battered by their husbands in one year.

The Women’s Committee of the National Council of Resistance of Iran salutes Iranian women and particularly, the women political prisoners and prisoners of conscience for resisting and defying the clerical regime’s dictates. We also pay tribute to women who have lost their lives in the struggle for freedom and equality in Iran.

As suppression of women forms an inherent pillar of the mullahs’ tyrannical rule in Iran through which it subjugates the entire society, the quest for elimination of violence against women and upholding of women’s rights in Iran is intertwined with the nationwide movement for regime change. Likewise, defending women’s rights and equality is indispensable to the struggle for the Iranian people’s freedom.

Maryam Rajavi’s message: The most brutal violence against women in Iran