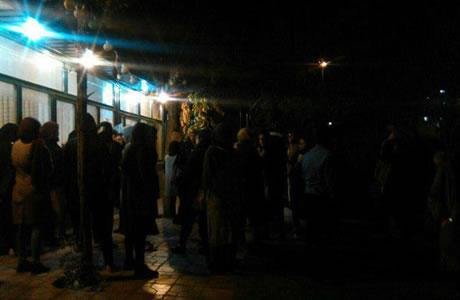 Young men and women held protest gatherings on 25 and 26 of November 2017, in various Iranian universities.

Girl students of Tehran University’s Chamran Dormitory gathered two consecutive nights outside the dormitory’s entrance after the deadline set for women’s entry to the facilities. The gathering held on the International Day for the Elimination of Violence against Women was intended to protest the restrictive regulations set to limit girl students’ freedoms.

Upon their subsequent entry, the girls refused to sign forms that sought their pledge not to violate the deadline for returning to the dorm.

Students of Medical Sciences University of Bojnourd, northeastern Iran, protested the incompetence of university officials on November 26, 2017 by refusing to eat the university’s low-quality food and lining up their trays on the ground.

Students of Bozorgmehr University of Qa’en, also in eastern Iran, lined up their trays on the floor during a protest gathering on November 25, 2017 to protest the expensive and low-quality food provided by the university’s restaurant.