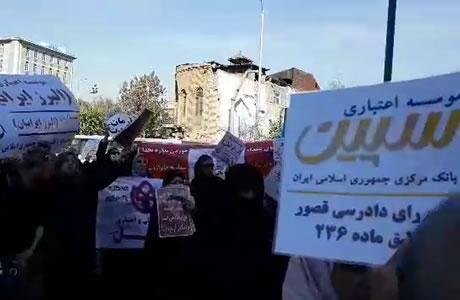 Women and men plundered by the state-backed credit institutes held various gatherings on Sunday, November 26, 2017 to demand their stolen money.

Simultaneous with a closed-door parliamentary hearing of Valiollah Saif, President of the Iranian Central Bank, protesters looted by Caspian, Alborz-e Iranian, Afzal-e Tous and Arman-e Vahdat gathered together outside the mullahs’ parliament (Majlis). The gathering had been called for in the social media since a few days before.

Protesters chanted, “Death to Saif” and other slogans demanding justice and their plundered savings. A unit of special forces intervened to disperse the protest.

Another protest gathering took place in Tehran, outside the Ministry of Cooperatives, against the Velayat-e Andisheh Institute in the city of Shahriar, in Tehran Province.

In Ahwaz, capital of the southwestern Khuzistan Province, people plundered by various institutes gathered in front of the Justice Department and protested against the Judiciary’s complicity with the thieves.