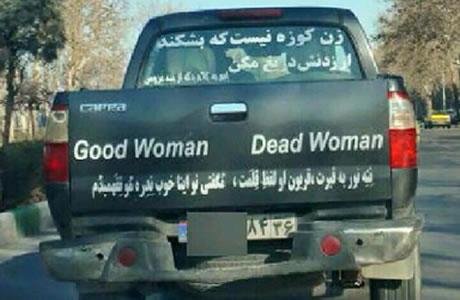 “All city advertisements in the streets or on public transportations, promote discrimination (against women) instead of educating citizens about rights and ethics,” said Nayyereh Tavakkoli, member of the Iranian Sociology Association.

Tavakkoli added, “We have neither provided a safe environment for women, in public transportations, the sidewalks or parks, nor have we created a calm environment for them.”

“The sections allocated to women in public buses are very disagreeable,” she added.

She also referred to the advertisements posted across the city or on public transportation vehicles, saying, “Not only these ads have not promoted citizens’ ethics, but most of them use coarse language.”

The advertisements promoting discrimination against women are mostly produced and published by state-backed agencies seeking to promote the official dress-code and the veil. (The state-run Mehr news agency – November 26, 2017)