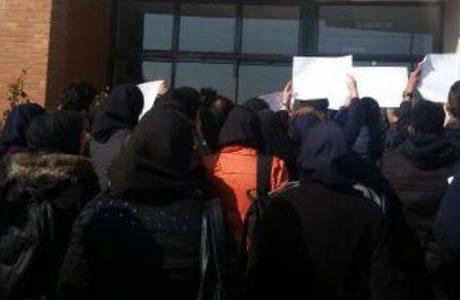 Iran: Women at the forefront of protests

Tuesday and Wednesday, November 28-29, 2017, saw more protests across the country by Iran’s men and women against the ruling regime’s fraud and repression.

People looted by state-backed credit institutes staged five separate gatherings in Tehran, Ahwaz and Mashhad to demand their money back. In the protest gathering in Mashhad in front of the Prosecutor’s Office, security forces beat up a woman, making the protesters outraged.

Contract teachers in Shahreza, in the central Iranian province of Isfahan, gathered on November 28, 2017, in front of the Department of Education to protest their undetermined employment status.

Another gathering took place on November 27, by former employees of Saderat Bank in front of the mullahs’ parliament in Tehran to protest their sudden dismissal. Some 600 men and women working in this bank were laid off overnight, three months ago.

On the same day, specialist physicians of Valfajr Clinic in Gachsaran, in southwestern Iran, gathered to demand their salaries unpaid for six months and other unpaid benefits. They vowed that they would not go back to work until achieving their rights.

Students also held their own gatherings on these two days.

On November 28, the post-graduate students of Tehran’s Melli University gathered outside the General Education building to protest fees demanded for prerequisite courses.

On November 29, 2017, students of Science and Culture University protested closure of the university’s entrance to the School of Art.