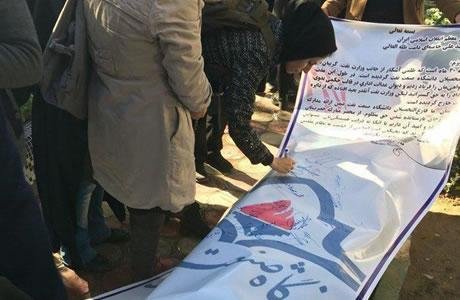 Following an earthquake of 6.1 magnitude in Kerman and its suburbs in southern Iran, young women and men studying at Medical Sciences, Bahonar and Khajeh Nasir universities of Kerman staged separate protests on Friday, December 1, 2017, against lack of safety in their dormitories and the resumption of routine program of classes and exams immediately after the earthquake.

On Saturday, December 2, 2017, in Tehran, a number of students of Melli University (Beheshti) gathered to protest against the university’s collection of extra fees for make-up courses.

Graduate students of Oil Industries University who had already staged a three-week-long sit-in protest in Abadan and Ahwaz (southwestern Iran), took their protest to Tehran and gathered outside Rouhani’s office. They vowed to stay there until their demand of being employed by the oil industry is met. They signed a petition demanding implementation of the law in this regard.

The Oil Ministry issued a statement in 2015, prohibiting all recruitment by the ministry while the students choosing this field are promised to be employed after graduation.

A group of literacy teachers gathered outside the Ministry of Education in Tehran on Saturday, December 2, 2017, to protest against their undetermined employment status.

Also, the residents of Tehran’s Pasdaran district staged a gathering on Friday, December 1, 2017, against building a tower in a nearby park stressing their need for green space and oxygen instead of towers which invade the residents’ privacy.

Ranjana Kumari expresses solidarity with the women of Iran