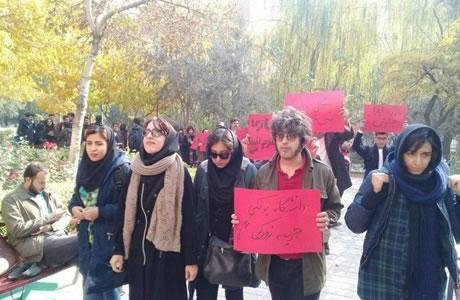 On the eve of the Student Day (December 7) in Iran, a number protest gatherings have been held by Iranian students in various universities where young women and girls have been actively participating.

In a rally held at Tehran University, a group of students made speeches and played a symbolic theatre in which they paid tribute to the students who have given their lives for freedom.

The young women and men of Tehran’s Allameh University staged a protest march, demanding free education as their right and condemned the school’s charging them with high fees. They accused university officials of having objectified the education.

Similar protests were held at Tehran’s Melli and Kharazmi universities as well as the University of Baluchistan.

Some of the slogans chanted by the students were, “Won’t be silenced despite threats and summoning of students”, “Forced labor before graduation, unemployment after education”, “students are suppressed all across Iran from north to south”, “Girls’ dormitories are prisons”, “Free education is our right, forcible tuition is neither justice nor legal”, etc.