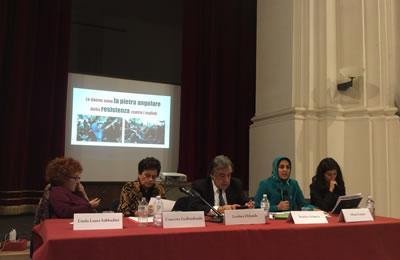 Free women of the West urged to support Iranian women’s struggle. Following is the speech delivered by Elham Zanjani, member of the Women’s Committee of the National Council of Resistance of Iran, at a conference in Palermo, Italy, on November 23, 2017, on the eve of the International Day for the Elimination of Violence against Women.

Iranian women have a 150-year history of struggle for equality and against dictatorship. This history has placed Iranian women in a progressive position both culturally and intellectually. Women have played significant roles in three major movements in Iran during the twentieth century.

Over this span of time, we have seen vanguard women who rose up and proved their competence in various arenas despite the reigning culture and policies of tyranny and misogyny. This phenomenon was most significantly demonstrated in women’s courageous participation in the anti-dictatorial struggles over this period.

Women’s struggle is essentially the best and most comprehensive indicator of progress in a given society. How can we measure the advances of a society towards real progress and development? The answer is to the extent it endeavors to achieve freedom and equality.

In the absence of gender equality, any political, economic or social progress would be ineffective, brief, or reversible.

From this vantage point, the uprisings which led to the 1979 overthrow of the Shah in Iran marked a major leap forward through women’s remarkable and extensive participation in street demonstrations. Shortly, Khomeini, hijacked the revolution brought by the people to build freedom and democracy, and a dictatorship was instated. However, the new phenomenon of women’s active presence, unveiled the Iranian people’s widespread desire for progress. At the same time, it revealed a shocking contradiction:

On the one hand, the ruling regime quickly adopted regressive and despotic policies and caused appalling backwardness. On the other hand, the Iranian society was broadly seeking freedom and democracy, and sought to make social progress and advancements.

Such contradiction led in the first step to a major clash. The barbarity and savagery of the new regime drenched the Iranian revolution in blood.

Women’s active participation in confrontation with the mullahs’ religious fascism formed the corner stone and foundation of resistance against the regime.

Quantitatively, women’s participation in this struggle was extensive since the outset. Qualitatively, they were brave, efficient and selfless.

Tens of thousands of women were tortured or executed in the struggle against the ruling fundamentalist regime. These events were particularly transpiring in the 1980s.

If Iranian women did not have powerful motivations, and if they had not set their sights on a bright and magnificent horizon, they would have definitely been intimidated by the merciless tortures and massacres that were unprecedented in our contemporary history. But, instead, the clampdown made them even more determined and resolute.

Women’s role rapidly became more pronounced in the post-revolution developments in Iran. They became the pivotal force of the movement.

Today, women hold key and leadership positions in the resistance movement. They make up more than 50 percent of the members of the Resistance’s parliament-in-exile. Our movement is led by a woman, Mrs. Maryam Rajavi, a Muslim woman at the leadership of a movement to eradicate the religious fundamentalism ruling our country, Iran. She believes that in addition to their struggle for equality, women have a historical mission to bring freedom to today’s society. In other words, today’s women represent the force for progressive change in our societies. She has met the point where without the decisive involvement of women, our movement would not have survived against the religious fascism. This is the exigency of this era, an era where the solutions and the mindset that back the male-dominated world have reached their demise. This era is in need of a new solution, founded on the values offered by equality.

Please allow me to explain in this regard a special experience of the Iranian Resistance.

In the 1990s, our movement answered to the issue of women’s leadership on various levels which changed the organizational structure of our movement. Our women had stepped into a path that had no previous precedent or examples in the past. So, they decided to remove anything that bore any sign of inequality, anything that ignored women or obstructed their collective participation, and built new relations in their stead.

They overcame the monster of internalized disbelief as their main obstacle and began to cultivate a sense of self-confidence and believe their own abilities. They liberated themselves from the clutches of the mindset that viewed them as a mere commodity. Instead of passivity and evading responsibility, they chose to assume their responsibilities. They avoided fear of failure and weakness in the face of difficulties and created new relations based on friendship and sisterhood.

The main question is how did they overcome the customs and traditions deeply entrenched through thousands of years, and how did they manage to carry on and move forward. The truth is that, this transformation since its inception in our movement, did not aim to simply switch the leadership roles of women and men.

Women’s participation in various leadership and management levels is indeed a step forward but it is not sufficient to create a new culture unless it is accompanied by a fundamental revolution permeating the entire culture and relations between men and women. And so long as it does not establish equality and solidarity, its achievements would tend to be reversible.

And this is exactly where the message of our Resistance lies. The message is that women’s leadership can become a lasting institution and tradition only when it is necessarily supported by men who have faith in, and are committed to, the ideal of equality, and who accept their rightful responsibilities in this regard.

The men in the Resistance movement firmly rejected the outlook that sees women as mere objects, thus develop a novel attitude, which helps them recognize women’s strengths as human beings.

The goal was to eliminate gender discrimination. It was not as if men left their posts so that women could occupy them and preserve the same sort of relations and use the same methods. It was not as if women walked in the footsteps of their male predecessors or joined a male-dominated club; not at all. The goal was to replace the obsolete relationships based on a male-dominated ideology with humane relations.

This means that relations of both women and men become free from negative judgment and competition, as well as narrow-mindedness and prejudice.

In this case, everyone sees other individuals’ advances not as an obstacle but as a new opportunity for their own progress.

This novel phenomenon is represented first by the leader of our movement, Mrs. Maryam Rajavi who first took the responsibility of the resistance movement facing a misogynist and fundamentalist regime and furthermore, uniquely divided her hegemony with 1,000 pioneering women who are now members of the central council of the movement, following a generation of men who seek freedom and equality.

In Iran, a regime based on inequality marginalizes women.

A regime that prevents the participation of a great portion of the populace in running their country’s affairs, ends up with absolute tyranny, totalitarianism, monopoly of power, secret decision-making, corruption and repression, with the country’s wealth and resources wasted.

Women’s leadership is the solution to this dilemma, which has become universal in today’s world. Where there is no democracy, you cannot achieve it without women’s equal participation in leadership.

For the free Iran of tomorrow, our movement places great emphasis on women’s equality with men and believe it is imperative for the overthrow of the religious dictatorship and is the guarantee for democracy; equality in the eyes of the law and judiciary, equality in the family, equality in economic opportunities, and active and equal participation in political leadership.

We espouse women’s freedom and freedom of choice, including her freedom to choose her attire and her career, and she must also enjoy the right to divorce.

Only a small part of the heroism of Iranian women has been reported or registered in history because the misogyny of dark-minded rulers does not allow the narration or description of women’s bravery, courage and heroism. And the women’s legacy we know of has been widely distorted or censored.

All of these pictures comprise our history. The history of our people’s longstanding fight for freedom against tyranny and dictatorship.

These show that the Iranian people and women’s desires today for freedom and equality against the ruling dictatorships, particularly against the Iranian regime, enjoy a long, rich and powerful backing. It shows how our women’s struggle has evolved step by step, over all these years, until today when they play a pivotal role in the resistance of the people of Iran for freedom.

When you look at these pictures, it conveys this message: such endurance will definitely turn the page of history and Iranian women will topple the mullahs’ regressive, medieval, warmongering and terrorist dictatorship. And the day of the Iranian people’s freedom is not far, the day when the people of Iran and the people of the region will be liberated from the clutches of the warmongering regime ruling Iran. It is then when peace and security will be guaranteed in the world. We must rise up and we ask you to join us.