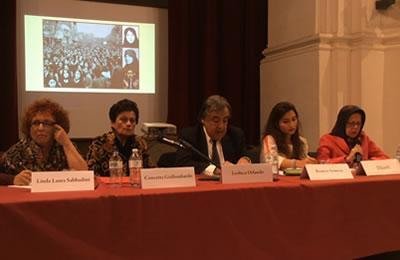 Following is the speech delivered by Elaheh Arjmandi, deputy chair of the Women’s Committee of the National Council of Resistance of Iran, at a conference in Palermo, Italy, on November 23, 2017, on the eve of the International Day for the Elimination of Violence against Women.

I am honored to be here with you today as we mark International Day for the Elimination of Violence against Women.

I would like to salute my brave sisters in Iran, those held behind bars for standing for their ideals and beliefs in the face of this corrupt and misogynous regime and the millions of women who turn every opportunity into an act of defiance in a large prison named Iran.

I would like to pay tribute to the thousands who have sacrificed their lives for freedom in my country such as Fatemeh Mesbah 13, Masoumeh Azdanlou, pregnant upon execution and Reyhaneh Jabbari, 26, who defended herself against rape but was executed after 7 years in prison.

A fundamentalist regime has been ruling my country Iran for more than 38 years, a gender apartheid, based on the rejection of women’s fundamental rights and suppression of women. In the past three to four decades, nowhere in the world have women been tortured and executed in such great numbers or assaulted in prisons as they have been in Iran.

120000 members of our movement have been executed by the Iranian regime for their opposition, among which 30% were women.

From day one, Iranian women have been the main victims of this misogynist regime as they are systematically suppressed.

So far, all that the world has known about today’s Iran is no more than a small part of the tragedy. The essential characteristic of the fundamentalism ruling Iran is its misogynist nature. In practice, nobody can sense this characteristic more than Iranian women, who feel it every day with their flesh and bone. The rule of the mullahs has crushed all their rights, freedoms, culture, family and private lives. Consider the following:

The Iranian regime is the enemy of women because it rules by constant violence and suppression of women.

In addition to 74 forms of torture practiced in the regime’s political prisons, a large number of young women were raped before execution according to a shameful fatwa (ruling).

Rape is the primary form of torture used against women in prisons and other suppressive centers. In the 1980s, among the women’s wards in prisons, there was a special ward called the “residential unit.” This ward was set up for raping women prisoners, marking an unparalleled tragedy in history. Very few women prisoners survived these residential units and those who have, have not come out mentally stable.

Thousands of women were executed, sent to the gallows or tortured to death, stopping thousands of beating hearts who yearned freedom and equality.

The victims were thousands of determined human beings each of whom was a world of compassion and knowledge.

Iranian women, who gained the right to vote before most European countries, have been treated as second class citizens and by law, they are deprived of their most basic rights.

According to the Global Gender Gap Report just recently published in early November, Iran is ranked 140th out of 144 countries, meaning that the situation of women is only worse in four countries of Chad, Syria, Pakistan and Yemen.

Another area of violence and compulsion in Iran is the mandatory dress code or Hijab. On the average 2,000 women are arrested daily for not observing the forcible dress code, by the 26 agencies in charge of controlling what women wear in public.

Women comprise over 60% of university students despite positive discrimination imposed for men and while they are banned from 77 fields of study. But unfortunately only 4% are present in the workforce.

Under the so-called moderate Rouhani, the situation of women and human rights has deteriorated, with over 3200 executions, including 81 women.

Yes, the price of standing up to the religious fascism ruling my country, for freedom and equality, has been very high!

In the summer of 1988, what is called the “summer of blood,” Khomeini issued a “fatwa” to execute political prisoners, many even had finished their prison terms. 30,000 political prisoners including thousands of women including 40 pregnant women, 800 minors under 18, mainly members of the principal opposition movement, the PMOI, were executed as part of the regime’s campaign to wipe out its opposition.

Over a period of a few months, the “death committees” established to carry out executions rounded up tens of thousands of political prisoners, giving them “trials” that lasted only minutes.

Nevertheless, despite such a genocide, our movement grew larger and more determined!

Last year, the president of our resistance movement, Mrs. Rajavi called on the Iranian people to call for justice for the victims of this genocide. A vast campaign was launched around the world and finally following intense work, Ms. Asma Jahangir, the Special Rapporteur on the situation of Human Rights in Iran, put emphasis on this massacre in her report to the Third Committee of the United Nations General Assembly in October. Also, the UN Secretary General, Mr. Antonio Gutteres referred to the massacre in his annual report.

We urge all institutions that defend human rights, to support the Iranian Resistance’s call on the United Nations to form a committee to investigate the 1988 massacre of 30,000 political prisoners, so that the Iranian officials in charge of this crime against humanity would face justice.

Italy has been a vanguard and has played a key role in the movement to stop executions. The people of Iran and the Iranian resistance urge the Italian people to rise once again to their historic responsibility.

We once more make our pledge to continue our struggle for freedom and democracy.

As Mrs. Rajavi has said to our sisters in Iran: although the pain of inequality, humiliation and insult is devastating, and although the mullahs have trampled upon all your rights and personal freedoms, family, social and political freedoms to deny you your human identity, there is a tremendous hidden power in you that has turned the Iranian woman into the force for overthrowing the clerical regime.

The antagonism and crimes of the mullahs’ regime against you indicate the regime’s fear from you. The Iranian society is thirsty for a new era and burning with the desire for change.

We are in need of a global movement that would rise to defend the beating heart of struggle for freedom and equality and today, I look to you, the liberated women of western countries to join us to rise to this humanitarian, ethical and freedom-seeking duty to defend the rights of women in Iran.

Iran: Kurdish woman fined and sentenced to 50 lashes of the whip