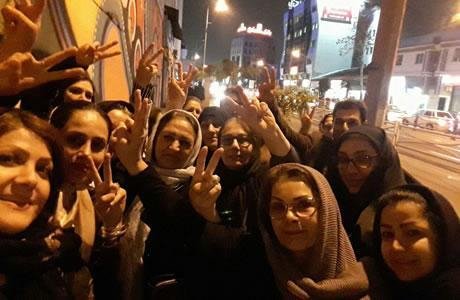 In Rasht, capital of the northern province of Gilan, protesters staged their gathering simultaneous with the arrival of Majlis Speaker Ali Larijani to deliver a speech. A woman protester said, “When Larijani arrived at 2 p.m., we chanted, ‘no more plundering, people’s pockets are empty.’ We stayed there until 6 p.m. The security police, the IRGC, the intelligence, the SSF forces all begged us to leave but we stayed. We were only 17 women and 2 men. When Larijani was leaving, we kicked and punched his car and followed it while chanting where is our money? Security forces had all panicked.”

In Tehran, people plundered by Vali-e Asr Institute’s branch in Tehran’s Robat Karim district gathered in front of the Judiciary’s building and chanted, “We have been betrayed, our trust has been violated.”

Also in Mashhad, northeastern Iran, people plundered by the Caspian institute staged a gathering and demanded their money back. They vowed not to relent until they achieve their rights.