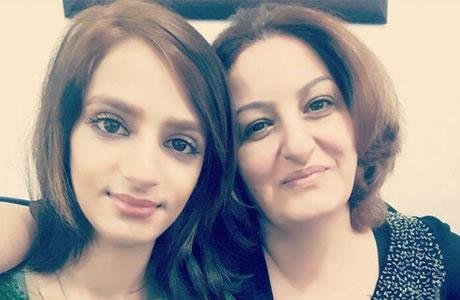 An Iranian Kurdish woman and her daughter from Sardasht were taken to prison on Wednesday, December 13, 2017, to serve their sentences.

Mrs. Soheila Zobeiri, 46, has been sentenced to 24 months in prison, and her daughter, Safa Hassanpour, 18, to six months, on the charge of “disrupting public order by participating in protest gatherings.”

They were arrested and judged during a protest demonstration in May 2015 against the suspicious death in Mahabad of a young Kurdish woman, Farinaz Khosravani.

Farinaz Khosravani, 26, worked in Tara Hotel of Mahabad but threw herself off the fourth floor’s window on May 4, 2015, and died to defend herself against rape by an Intelligence Ministry agent. Her death was ensued by massive protests in Mahabad and other Kurdish cities.

Iran: Forcible hair-cut for girls who do not properly cover their hair