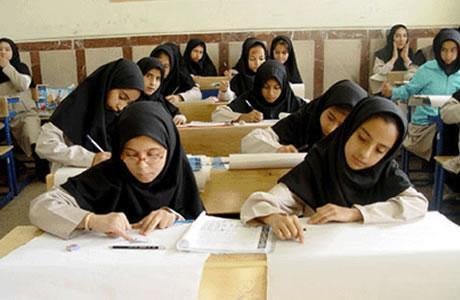 “There is a significant difference and gap between girl and boy students” in Iranian schools.

Admitting that “women have always faced injustice” in Iran, Minister of Education Mohammad Bat’haii added, “In some mixed-gender schools or girls’ schools with male teachers, school girls are deprived of physical education. In deprived regions, girls play in a corner during the physical education hour.”

Earlier, Ahwaz deputy in the mullahs’ Parliament, Javad Kazen Nasab al-Baji, had also admitted that in some deprived regions and villages in southern Khuzistan Province, girls’ education is restricted to the elementary level. (The state-run Mehr news agency – December 16, 2017)

While 60 per cent of the Iranian student population is made up of women and girls, Bat’haii pointed out, “Despite the large number of women and girls in educational institutions, the potential of this human force has not been deployed.” He said the director of women’s affairs is obliged to provide solutions for this problem in collaboration with other relevant officials.

In the meantime, Massoumeh Ebtekar, Rouhani’s deputy in women and family affairs, confirmed that women are the first victims of Iran’s disastrous state of unemployment. She told a gathering in Gonabad, northeastern Iran, “Educated women’s unemployment rate is more than men’s… The number of unemployed educated youths in the country has increased over the past several years and they have no opportunity to engage in their specialized fields.” (The state-run ISNA news agency, December 17, 2017)