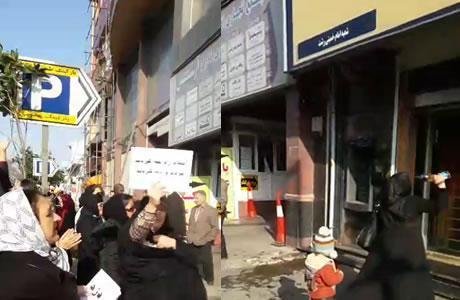 Plundered people consisting mostly of women gathered on Tuesday, December 19, 2017, in front of a Caspian credit institute’s branch in Rash, capital of Gilan Province in northern Iran. They furiously protested being robbed by this company and threw eggs and tomatoes and splashed paint on the building. They also chanted “death to Rouhani” and denounced his government for pilfering the Iranian people.

People cheated by Arman-e Vahdat institute in Ahvaz, capital of southern Iranian province of Khuzestan, also gathered on Tuesday in front of the Justice Department building and demanded a solution for reimbursement of their looted money.

Investors plundered by Caspian Institute in Mashhad, northeastern Iran, staged a similar protest in their city.