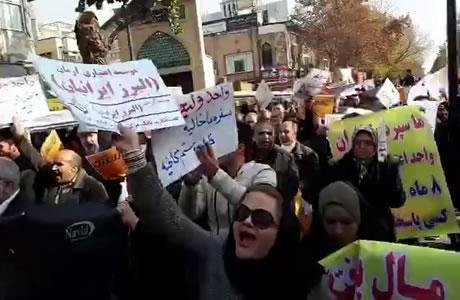 People plundered by state-backed credit institutes staged protests in Tehran’s Bazaar and outside the Prosecutor’s Office. They chanted “death to Rouhani” and protested the government’s incompetence in handling widespread bureaucratic fraud.

A group of men and women plundered by Caspian Institute in Mashhad, northeast Iran, gathered in front of the company’s branch to protest fraud and injustice.

Students of Hakim Sabzevari University in Sabzevar, northeastern Iran, staged a strike to protest against the university’s mismanagement. They also protested against low-quality food, lining up their trays on the ground.