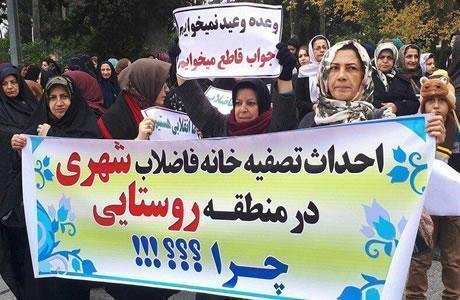 A large group of women and residents of Ramsar held a gathering outside the Governor’s Office on December 21, 2017, and protested the construction of a sewage treatment plant near their neighborhood. The protesters demanded a serious response instead of hollow promises.

The coastal city of Ramsar is located in the Province of Mazandaran, northern Iran.

Ramsar residents have repeatedly held similar gatherings during recent months, but officials have not met their demands, yet.

In the southern Iranian city of Kerman, men and women plundered by Caspian credit institute braved the cold weather and gathered on December 21, 2017, outside the institute’s building for the third consecutive day.

The protesters stressed that they do not fear the Iranian intelligence services and vowed to continue their protests until they get their money back.