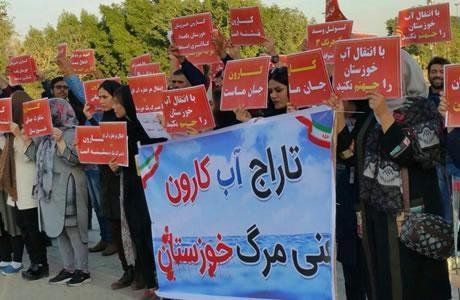 The brave women of Iran play a prominent and active role in most of the protests held by different social sectors in Iran against the regime’s fraud and inhuman policies.

Thousands of people in Ahwaz, southern Iran, gathered on December 22, 2017, to protest against the diversion of Karoun River’s water and drying ponds and agriculture lands. A brave woman led the rally. The protesters, chanting furious slogans, declared that they are no longer going to put up with the regime’s plunder and fraud.

Another protest was staged on the same day by employees of the health clinics of Tabriz, northwestern Iran, in front of the Salamat Complexes, who demanded their wages overdue for three months.

Unemployed women and men in the southern Iranian port city of Khorramshahr also held a protest during the city’s Friday prayer.

On Thursday, December 21, 2017, some 400 health specialists and supervisors gathered in front of the Health Center 2 in Isfahan, central Iran, to protest against new tests conducted by the center with the intention of laying off their employees.

A participating woman explained, “We were suddenly informed that we have to pass a test aimed at laying off the work force. This is why the 400 of us have refused to take the test and gathered instead to protest such policy.”

On the same day in Rasht, capital of Gilan Province in northern Iran, clients who had bought residential units at Adineh Complex, gathered in front of the half-built complex building to protest the delay in handing them the units they had bought.

In Azadshar, in Golestan Province, northern Iran, people plundered by Parham Car Sale Co. gathered in front of the Melli Bank to protest against being robbed by this company. The company has extorted more than 250 billion toumans (approx. $70 million) from 1500 investors.