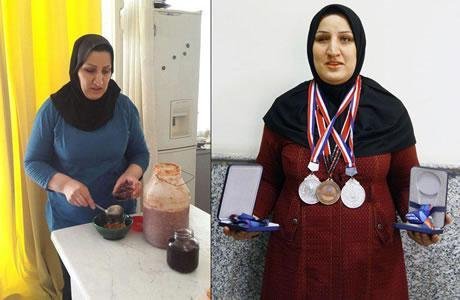 Shot put record holder among blind women and the fifth Paralympics champion is earning her life and paying for her practices by selling handmade pickles.
Hajar Taktaz is 41 years old. She was born with visual ailment and became blind when she was 18. In 1997, she started her sports life upon her teacher’s encouragement. Since 1998, she has been a shot put record holder. She won two Asian vice championships in the Para-Asian tournaments in 2005, and then won the fifth rank in the Paralympics.

However, she has not received anything as a professional athlete except for her prizes. She has to pay all her training costs in addition to her medical treatment expenses.
“It is very difficult for us to work as women,” she says. “Many blind women athletes have left practicing because of financial problems. Presently, I am earning my life by making handmade pickles and selling them to acquaintances,” Ms. Taktaz added. (The state-run Asr-e Iran website – December 23, 2017)