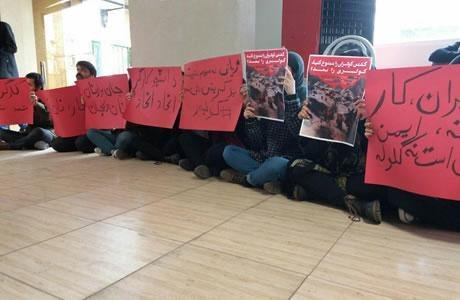 Young women and men who study at Tehran’s Allameh Tabatabai University staged protests on two consecutive days against the slaughter of Kurdish porters by the Iranian security forces.
On Saturday, December 23, 2017, students of the School of Social Sciences at Allameh University distributed posters among students, condemning the security forces’ shooting at porters. The protest continued on December 24, 2017, by staging a sit-in protest at the entrance of the college.

The students held placards reading, “Bread, Jobs, Freedom.”
Allameh students say, “Over the past 9 months, 28 porters and salesmen have been directly shot to death by security forces, and 53 were wounded in the same way.”
This protest was followed by harsh threats made by the university’s security. They also collected the distributed posters.