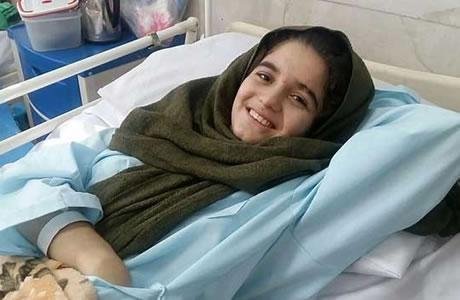 In the ancient myths, the stereotype for a hero has always been a big, strong man. Recently, however, a story has been circulating on the internet about a frail, young teenage girl who has been named a national hero.

Haniyeh, 13, used to live in Sarpol-e Zahab, the epicenter of the earthquake that hit Kermanshah Province in western Iran on November 12, 2017.

“We were at home that night when the earthquake struck,” says Haniyeh. “Our grandma was staying with us that night. We started to run but as I was running away, I suddenly remembered my little sister who was sleeping upstairs on the carpet. So, I ran back inside.”

As soon as Haniyeh finds and grabs her sister, a steel bar falls from the roof and hits her back and the power goes off…

“The next thing I remember is that my father came with his car and took us to hospital. My mother was taken to Tehran.”

Haniyeh’s spine has been severed, but she says, “I do not regret what I did. I’d never wanted my little sister to be in my place.”

Haniyeh is presently hospitalized in a Kermanshah hospital whose officials are recommending that she be taken to a convalescence home for the elderly.

Had it been in some other country, Haniyeh would have received numerous awards and offered government aid to receive medical treatment and gain back her health. In Iran, however, the only help available for this young teenager is the elderly house.

Is this her reward for a loving sister who jeopardized her own life and future opportunities to save her toddler sibling?

One of the hospital nurses says if she receives a good treatment and physiotherapy there is a chance for her to gain back her health.

Haniyeh is one out of hundreds of young little girls who have lost their homes and parents in the earthquake in Kermanshah. She is one out of thousands of little girls who are deprived of opportunities and are discriminated against all across Iran. The girl children who burned in Shinabad school, and those who died while taken on a tour by their school.

Despite pervading injustices, Iran’s women and girls are the force for change and they are the ones who will realize equality and freedom for the whole nation.