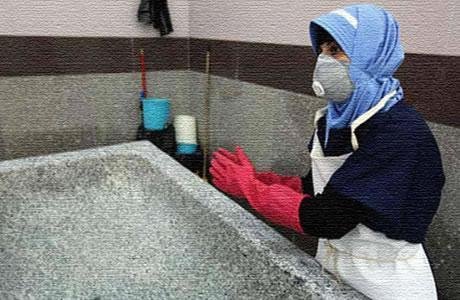 Iran: Middle-aged woman sentenced to one year of forced labor

A Tehran court sentenced a middle-aged woman to a year of forced labor in Behesht-e Zahra’s washing room to clean the dead before burial, for her alleged illicit relations with a strange man.
This middle-aged woman was a government employee, living in Tehran away from her husband due to family problems.

She was planning for divorce. Her husband filed a complaint against her after seeing her in a film footage along with another man.
The sentence was handed out without determining the nature of their relationship, and despite the accused woman’s denial of having committed adultery. (The state-run ROKNA website – December 25, 2017)

Iran: Suicide catastrophe in Iran, the ominous outcome of the clerical dictatorship