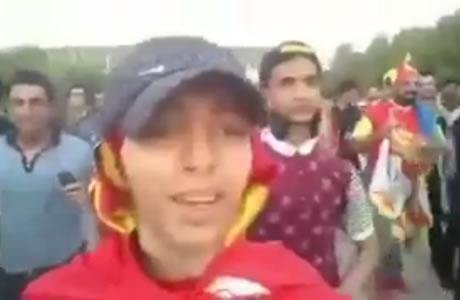 Two young women, Shabnam and Zeinab, managed to enter Qadir Football Stadium in Ahvaz, capital of the southwestern Iranian province of Khuzistan, and watch their favorite football team to the end.
One of the girls wore men’s clothes and the other painted beard on her face.

In a selfie footage showing her at the stadium, Zeinab says, “All the boys recognized that I was a girl but no one did anything.

I hope the day comes when we are all free.”
Last week, a video clip showing a girl climbing a stadium’s wall in Babol, in the northern province of Mazandaran, went viral.
These are acts of protest by young Iranian women to protest against the clerical regime’s official ban on their entrance to stadiums. (The state-run ILNA news agency – December 25, 2017)

Iran: 10-year-old gymnast summoned for not observing the veil abroad