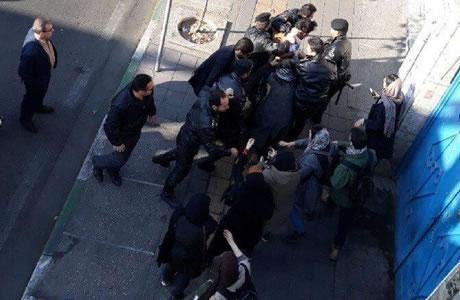 Iranian women actively participated in three protest rallies on Tuesday, December 26, 2017, in Tehran, Rasht and Mashhad.
Protesters including labor activists and members of the Syndicate of Workers of Tehran and Suburbs Bus Company, converged outside the Labor Ministry in Tehran upon a call previously issued by Mrs. Robabeh Rezaii, wife of the imprisoned labor activist Reza Shahabi.

The participants protested the denial of medical treatment to political prisoner Reza Shahabi.

Police and plainclothes agents violently attacked the gathering from the outset, and arrested more than 50 people, including 10 women. Mmes. Robabeh Rezaii, Reyhaneh Ansari, Romina Mohseni, Ronak Rezaii and Jila Makvandi were among those arrested.
All the detainees were released from Evin Prison at around 4:00 p.m., but most of them complained from pain and symptoms of beatings by security forces.
In Rasht, capital of the northern province of Gilan, people plundered by Caspian credit institute pelted rotten eggs and tomatoes at the institute’s building. They chanted against state-backed fraud which has wasted their lifetime savings.

In Mashhad, capital of the northeastern of Khorassan Razavi Province, the interns of Azad University’s School of Medicine gathered in 21st of Azar Hospital to protest against the increase of school fees and non-payment of their wages for working in the hospital.

The gathering came after frequent requests by the intern’s representatives for a meeting with the university’s president failed to produce any outcome.