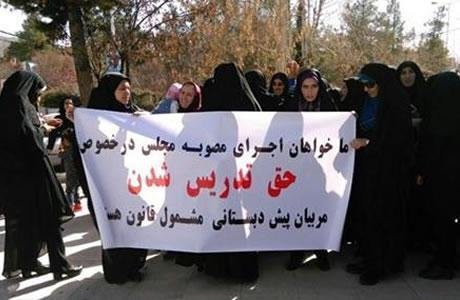 A group of women and men plundered by the Az-Zahra institute staged a protest gathering on Monday, December 25, 2017, outside the Governor’s Office in Mashhad, capital of the northeast Iranian Province of Razavi Khorasan.

The State Security forces lined up in front of the protesters who only demanded their stolen properties. The protesters blamed Rouhani’s government for their poverty and devastation.

On the same day in Ahvaz, capital of the southwestern province of Khuzistan, a group of residents of Charsad Dastgah District gathered outside the Governorate to protest the decision of the municipality of Ahvaz to destroy their unofficial residences. They say, they have been inhabiting in this district for 50 years. The participating women held a banner which read, “Don’t demolish Charsad Dastgah on our children’s head. Winter is on the way.”

In Tehran, students of empowerment staged a gathering in protest to the new regulations devised for building new empowerment centers by specialists. They called for reforms in the laws in this regard. They held flyers which read, “It is a student’s right to have a bright future” and “Who would account for the high expenses imposed on the patients?”

Pre-school women teachers in Yasouj, capital of Kohgilouyeh and Boyer Ahmad Province, in southwest Iran, held a protest outside the Governorate’s Office. One of the participating women said, “To have our status determined we staged a gathering outside the parliament (in Tehran), and this is the fourth time we are gathering outside the Governorate of Kohgiloyeh and Boyer Ahmad Province. But no one is willing to listen to us.” She added, “We will keep up our protests until we receive a reasonable and convincing response from provincial officials.”

Another protester said, “Some of these teachers have 13 or 17 years of experience, but they receive a meager salary, without any insurance, benefits or bonuses.” She added, “The highest wage these teachers receive is just 300,000 toumans ($84) which is very small.”

Iran: Issues of women and children are overlooked