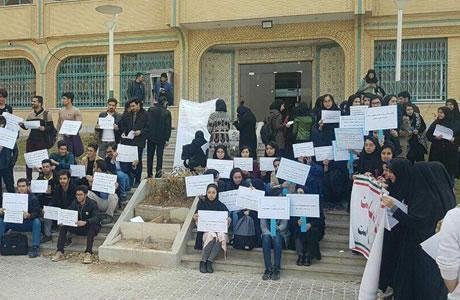 Women continue their active engagement in social protests in Iran.
Girl and boy students of the Rehabilitation School of Isfahan’s Medical Sciences University gathered on their campus on Tuesday, December 26, 2017, to protest against the bad logistical conditions at the university and their career prospects.

A group of retirees from Zarand Coal Company in Kerman, southern Iran, gathered on Wednesday, December 27, 2017, in the office of a parliamentary deputy in protest to the government’s failure to issue them permissions to build on their own lands.