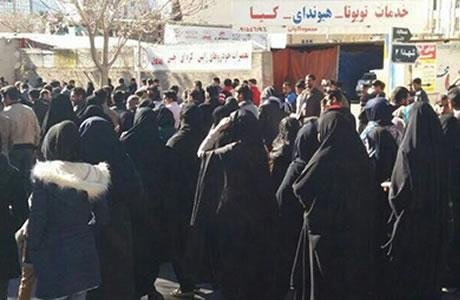 Over 10,000 Iranian men and women, young and old, demonstrated in Mashhad on Thursday morning, December 28, 2017, chanting “death to the dictator”, “death to Rouhani” in protest to unbridled, daily hike in the cost of basic necessities of life.

Eyewitnesses reported that women played a prominent role and showed unprecedented courage in opening the way for others and confronting security forces.

Mrs. Maryam Rajavi, President-elect of the National Council of Resistance of Iran, hailed Iranian protesters and admired women’s courageous role in this major uprising. She said, “The courageous protests erupting in vast parts of Iran today, once again demonstrate that the overthrow of the clerical regime and replacing it with democracy and popular sovereignty is a nationalist and nationwide demand.”

“The only way out of economic and social problems is the overthrow of the mullahs’ regime,” she reiterated.

In Mashhad, the second most populated city in Iran, capital of the northeastern province of Khorassan Razavi, the protest began in Shohada Square outside the Municipality building and quickly spread to a vast area.

The demonstrators blamed Rouhani’s government for high prices and mocked its hollow promises. They called for action against pervasive embezzlements and the regime’s interventions in countries in the region.

Outside the Holy Shrine of Imam Reza, security forces attacked the people and beat them up severely. The beating of a woman and spraying her in the face outraged the demonstrators and provoked an angry reaction. The arrival of water cannons led to further clashes and more injuries. At least 100 protesters were arrested in Mashhad.