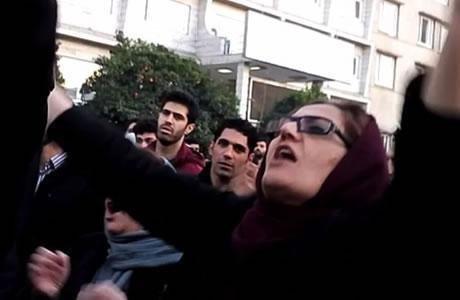 Iran: Women at the forefront of protests in cities across the country

Friday, December 29, 2017, courageous women and men in various cities across Iran took to the streets for the second consecutive day to protest skyrocketing prices of basic staples.

One of the major centers of protest was in the western Iranian city of Kermanshah where in addition to high prices and unemployment, people have recently suffered a devastating earthquake.

Chants of “death to Rouhani”, “death to the dictator” were universal in all the cities. The protesters also chanted, “We don’t want the Islamic Republic”, “death or freedom”, “free all political prisoners”, “we are going to take back our country.”

Tehran Governor’s deputy for security declared the arrest of a number of people who had intended to launch a protest. In most cities, security forces used batons and tear gas to deal with protesters. In Rasht (northern Iran), SSF agents hit and injured a young woman in the head with batons.

Women actively engaged in all the demonstrations and confronted the regime’s security forces. They also played a significant role in keeping the protests going.

In Hamedan, a brave young woman confronted the security forces and protested beating of youths. She cried out, “death to Khamenei,” the mullahs’ supreme leader. A courageous woman in Abadan (southwestern Iran) turned the city’s Friday prayer into a scene of protest against the regime’s corruption. The heroic women of Isfahan (central Iran) defied the security forces and did not obey their orders.