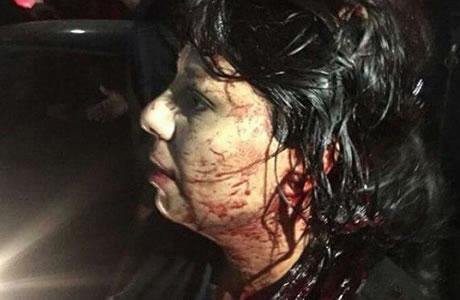 Dozens of women participating in the uprisings and protests across Iran on Saturday, December 30, 2017, were beaten and arrested.

The photo of a young woman who had been brutalized and bloodied by security forces in Gorhardasht, Karaj (west of Tehran) has been circulating on the internet and in the social media.

Also a young woman was beaten up by dozens of security forces in Rasht, northern Iran, for holding a cellphone.

The Women’s Committee of the National Council of Resistance of Iran has received video clips containing the voice of a young woman being arrested in Isfahan.

One of the two persons killed Saturday night, December 30, 2017, in Iran has been identified as Hamzeh Lashti who has a young son.

On Sunday morning, December 31, 2017, the mothers and families of those arrested in the course of the protests, gathered in front of Tehran’s notorious Evin Prison and demanded release of their loved ones.