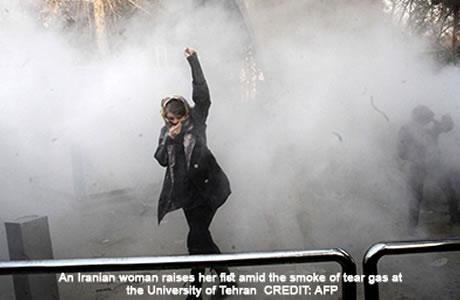 As nationwide protests continued in over 30 cities in Iran on Saturday, December 30, 2017, women played a significant role at the forefront of the protest demonstrations.

The protests have become really radical in a matter of three days. People in all cities are calling for the regime’s overthrow and chant directly against the mullahs’ supreme leader Ali Khamenei and the regime’s president Rouhani.

In Tehran and other cities people tore down Khamenei’s portraits. They chanted slogans calling on the mullahs to get lost, or give back their money and are united in confronting the regime’s suppressive forces.

Women are present in all the scenes. In Qom, a woman calls on passersby to join the protests; in Tehran, girl students of Tehran University encourage other students to not fear and maintain their unity. In Kerman, southern Iran, women lead the protests by chants of death to the dictator. In Isfahan, central Iran, young women joined young men in confronting the security forces. In Najafabad, Gorgan and Shiraz, one can clearly hear the prominent voice of women in the crowd.

In the meantime, women have been violently arrested in Tehran and beaten up in Rasht, northern Iran.

Women are also active in sending reports from the scenes of protest in cities across the Iran.

At least two have been reported killed by the regime’s supprresive forces.